Colors on the print may differ slightly from what you see on your screen.
Your print will be carefully wrapped in plastic stretch and a strong cardboard tube.
Please allow 1-3 weeks for deliver. 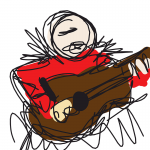